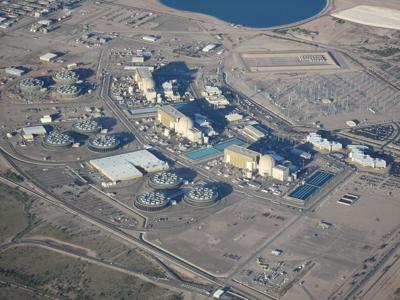 New Mexico regulators on Wednesday approved a plan that calls for new solar generation to replace the capacity that will be lost when Public Service Co. of New Mexico stops buying electricity from the Palo Verde nuclear plant in Arizona.

The utility will lose 114 megawatts after its Palo Verde leases expire — one in 2023 and the other in 2024. Under the plan, PNM will develop more solar energy with backup battery storage.

A proposal was filed with the Public Regulation Commission last April to prepare for the transition, but it took months for the regulatory panel to sign off despite requests by the utility for expedited consideration.

Utility officials said that due to the delay, some of the contracts to build the solar facilities will have to be renegotiated with independent energy developers. It also means the solar power won’t be available in time to help with peak summer demands in 2023.

PNM has cited the effects of the COVID-19 pandemic on supply chains, noting that developers are having difficulty constructing projects and delivering replacement power on time.

Similar delays are happening with solar and battery projects meant to replace some of the lost capacity that will come from the upcoming closure of the coal-fired San Juan Generating Station in northwestern New Mexico.

PNM is expected to submit its plan this week for meeting demands during peak summer months, saying a quick decision by regulators is imperative.

The commission contends it followed regulatory rules and timelines for evaluating the Palo Verde case.

Hearing examiner Cristopher Ryan said the process was time-consuming due to the complexity of replacing firm, around-the-clock nuclear power with intermittent solar energy. Some parties also questioned the adequacy of the utility’s bidding process.