Every auto startup wants to be the next Tesla. Why these 2 may have a real shot 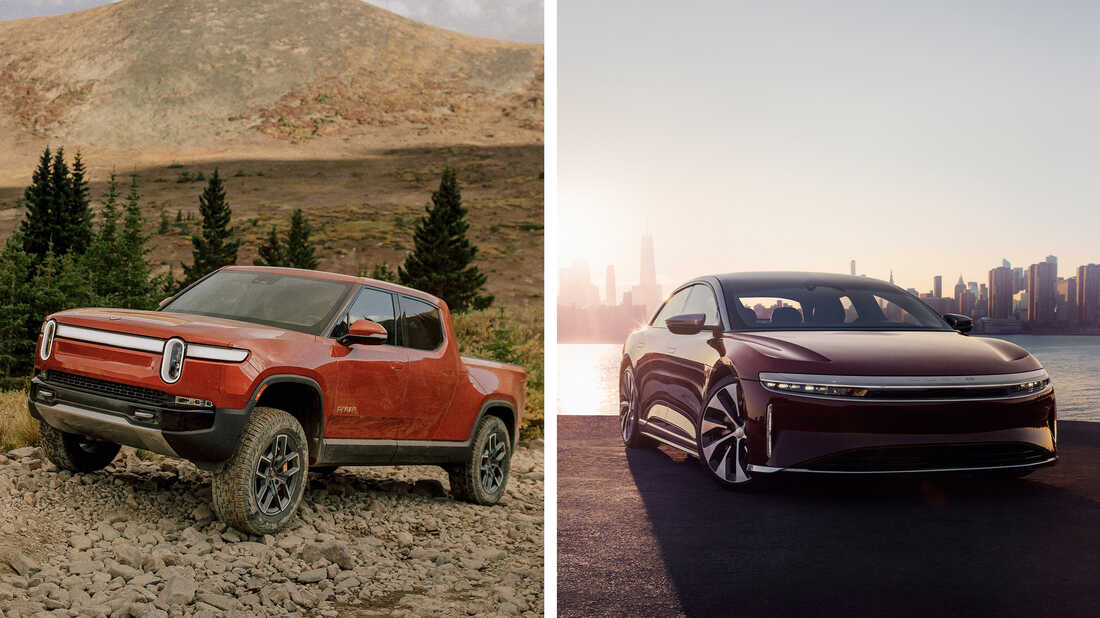 Rivian and Lucid aren’t household names. But, somehow, these two electric startups are each worth more than Ford.

Both companies are flush with cash, and they’ve reached a major milestone: They are actually producing and delivering vehicles to customers

That has left them at the front of an epic race to recreate Tesla’s astonishing success story, as the auto industry speeds toward a transition to electric vehicles.

The production volumes are still small — just a few hundred vehicles each so far. But they have big ambitions to scale up in the coming years.

And a lot of smart investors are banking big money that they will be able to pull it off. Lucid is bankrolled by Saudi Arabia’s wealth fund, while Rivian got investments from Amazon (which is also buying 100,000 of its delivery trucks) as well as Ford.

Both have executive teams that investors and analysts praise for focusing on the fundamentals, in a field often seen as being more about hype than substance.

Lucid is led by Peter Rawlinson, who has had a long career in the automotive industry, including a key role at Tesla helping engineer the Model S.

Meanwhile, Rivian CEO RJ Scaringe didn’t have a long automotive resume when he founded the company, but he did have a Ph.D. in mechanical engineering.

Yet there are still doubts about whether either can become a true player in the auto industry – especially as the established players like Ford and GM quickly move to electrify their most popular models.

Here’s a closer look at Rivian and Lucid.

America loves pickups, and Rivian hopes to profit off that passion.

Rivian’s R1T truck is the first electric pickup available for sale in the U.S. In itself, that’s a victory for the start-up: Many automakers were vying to be the first to offer a battery-powered truck.

Competition is fast on Rivian’s heels. Ford is rapidly scaling up production of its upcoming F-150 Lightning, a pickup truck designed for practicality (starting at $40,000, it can serve as backup power for your home in an outage, and Ford is emphasizing that it can run power tools at a work site.)

But Rivian is marketing toward a different audience, one eager to stow tents, skis or hiking packs in their truck, rather than lumber and toolboxes.

Features include a “gear tunnel” for stashing adventure equipment, a built-in flashlight that pops out of the door, removable bluetooth speakers so you can blast tunes at your campsite, and an optional kitchen with a sink and induction stove — for cooking off-road.

The truck, which starts at $69,000, is outdoorsy and luxurious at the same time.

It’s got creature comforts like heated and cooled “vegan leather” seats, and adjustable air suspension that can raise the ground clearance to nearly 15 inches for off-road adventures.

When he’s not a regulatory lawyer in D.C., Chen is a ski patroller in Pennsylvania. That, in itself, kind of sums of Rivian’s whole vibe.

The company also plans to bring an SUV to market, and is aiming at the corporate market with upcoming delivery vehicles.

If Tesla is a nice suit, and Rivian is a pricey Patagonia jacket, Lucid would be a clothing brand so posh most regular people have never heard of it.

To be precise, a company executive said Lucid’s clothing equivalent would be James Perse. That’s a California-based company that sells, among other things, recycled cashmere hoodies for $350.

Lucid’s preferred phrase for their aesthetic is “post-luxury” — meaning super premium materials and performance, but more minimalist than opulent.

“Unashamedly, this is a high-end product,” CEO Peter Rawlinson said in an interview with NPR earlier this year, as he drove around the streets of D.C. “It’s an awesome machine. It’s true luxury.”

The Lucid Air Dream Edition is a cool $169,000. Lucid says it’s trying to compete with the Mercedes S-class, the famously luxurious sedan, rather than any electric vehicle that’s on the market today.

The first edition of the Lucid Air has an uninterrupted glass roof stretching over the driver’s head, and the cabin is made of materials such as “silvered eucalyptus” wood, Napa full-grain leather and “naturally colored alpaca wool.”

The vehicle also boasts some record-setting specs for an electric vehicle: more than 500 miles of range, and claims of unprecedentedly fast charging speeds. According to Lucid, with the right charger, the vehicle can add nearly 300 miles of range in 20 minutes.

The Lucid Air just won Motortrend’s Car of the Year award, and the Dream Edition is sold out. Less expensive models, which have not started deliveries yet, will begin at $77,000.

But major challenges remain for both Rivian and Lucid

They may be attracting a lot of buzz, but the two models still face enormous challenges.

Rivian and Lucid need to scale up from making a few hundred vehicles to making tens or hundreds of thousands.

And they face mounting competition from the big automakers, who are also racing to catch up with Tesla — and who are planning mass production vehicles much cheaper than the luxury cars Rivian and Lucid are starting out with.

Some investors think the auto giants can’t move as nimbly as the disruptive new startups because they are still so heavily committed to producing gas-powered cars.

“The fact that you’re making millions of vehicles right now comes at a cost, and it’s the cost of having invested so much in internal combustion,” argues Asad Hussain, mobility analyst at PitchBook. “And I think as a Rivian, as a Lucid … you’re unencumbered by these challenges and you can build an [electric vehicle] company from the ground up.”

Not everybody is so sure.

“Although the Detroit automakers have often been portrayed as dinosaurs by the Silicon Valley crowd, the reality is that they have decades more experience in truck development than their startup competitors and are resourced to produce high volumes at lower cost,” Jessica Caldwell, with Edmunds, wrote after Rivian went public.

“Not to mention they have major brand recognition and enviable ad budgets,” she added.

Yet for now, investors seem to be betting that start-ups can innovate more easily than incumbents can change. And that has made Lucid and Rivian two of the world’s most valuable automakers.