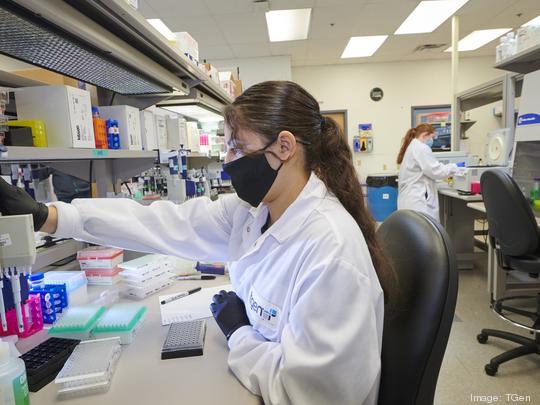 A nonprofit genomics research institute created an economic impact of $657.7 million in 2020, more than triple the $199.2 million in 2017, according to a new Tripp Umbach report.

The Translational Genomics Research Institute, which was founded in 2002, currently employs 350 people.

That employment number fluctuates as the Phoenix nonprofit continues to spin out companies, said Tess Burleson, TGen’s COO and president of TGen Accelerators, which is responsible for commercializing TGen’s technologies.

Burleson said she has another four startups in the incubation phase, with one that potentially could spin out within the next 12 months.

Since its inception, TGen has spun out more than a dozen startups.

The creation of TGen in 2002 was one of the sparks that catalyzed the creation of Arizona’s growing bioscience industry, said Joan Koerber-Walker, president and CEO of the Arizona Bioindustry Association.

“In its early days, the promise was advances in precision medicine and the ability to leverage the emerging field of knowledge around the newly sequenced human genome,” Koerber-Walker said. “Now, as TGen begins its third decade in 2022, we are seeing measurable results in both health benefit for Arizonans and economic impact.”

This was at a time before MD Anderson, University of Arizona College of Medicine, and Creighton University established a presence in metro Phoenix.

“This was a bet placed that I believe has paid off for Arizona,” Trent said.

It was Trent’s vision of what genomics could do for medicine, Burleson said.

“To be able to prove that genomic information in each of us can be very helpful to deliver better outcomes for patients,” she said. “That’s the vision Dr. Trent had. We’re looking forward to the future. TGen is committed to continuing to tackle the next phases of how precision medicine will one day be called medicine — delivering medicine in a more precise way.”

TGen’s 2020 operational research activities alone provided a total economic impact on Arizona of $426 million, a more than 300% increase from 2017.

Including TGen’s business spinoffs and commercialization of its research technologies brings that total to $658 million, according to the Tripp Umbach report, “Promises Realized: The Economic and Social Impact of TGen on the State of Arizona.”

In terms of employment, full-time, highly compensated knowledge-based jobs generated directly and indirectly by TGen totaled 2,179, a 167% increase from 2017.

TGen is affiliated with City of Hope, an independent research center for cancer, diabetes and other life-threatening diseases. Their precision medicine affiliation enables both institutes to complement each other in research and patient care, with City of Hope providing a significant clinical setting to advance scientific discoveries made by TGen.