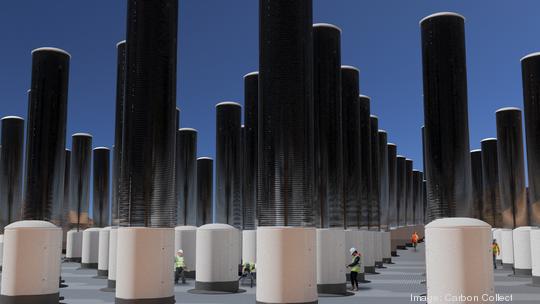 Arizona State University is taking a new step to combat climate change by installing its first “mechanical tree” in Tempe that removes carbon dioxide from the air, just as real trees do.

The trees, which are actually shaped like large tubes, remove carbon dioxide by catching carbon molecules on a unique sorbent material. The tree technology is also passive, meaning it does not need energy-consuming fans to direct air into its capture process.

These devices, called MechanicalTrees, are quite large, measuring five feet in diameter. The tree sprouts from a metallic base that stands several feet tall, and from there it stretches 33 feet in the air to expose the disks that actually collect the carbon molecules.

After sufficient time filtering the air, the tree fills up a 9-foot tall canister of carbon gas which is then swapped out for an empty vessel as the process starts over.

These trees were designed by Klaus Lackner, a professor in ASU’s School of Sustainable Engineering and the Built Environment and the founder of the Center for Negative Carbon Emissions. Lackner is a leader in the field of carbon removal, which is the process of capturing carbon emissions that can then be stored or repurposed.

“Carbon dioxide is a waste product we produce every time we drive our cars or turn on the lights in our homes,” Lackner told ASU News. “Carbon Collect’s MechanicalTree can recycle it, bringing it out of the atmosphere to either bury it or use it as an industrial gas.”

Bringing it to the market

Lackner is working with Dublin-based Carbon Collect, previously known as Silicon Kingdom Holdings, to bring the device to the commercial market. Carbon Collect holds exclusive global rights to Lackner’s work at ASU and the company sponsors ongoing carbon capture work at the university.

In order to avoid complete climate catastrophe, humans will need to both cut emissions and deploy carbon capture technology like Lackner’s trees. Captured carbon can be used in all kinds of applications, including concrete building materials, plastics, chemicals and more.

When operating continually, this first tree is expected to remove up to 200 pounds of carbon each day or about 36.5 tons in a year; For reference, the Environmental Protection Agency estimates that typical passenger vehicle emits about 4.6 metric tons of carbon dioxide annually, so a single tree would offset the emissions of about seven cars.

Carbon Collect is also planning on establishing “farms” with many of these tree devices that will be able to collect 1,000 tons of carbon each day. The International Energy Agency estimates that energy-related carbon emissions reached 33 gigatons of carbon in 2021, an amount that would require some 90,000 Carbon Collect farms to cleanse.