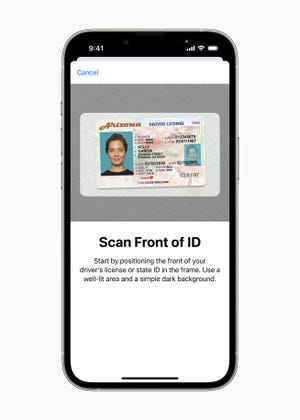 As of Wednesday, Arizona is the first state to allow individual driver’s licenses and state identifications to be stored on the Wallet application on iPhones and Apple Watches, Apple announced.

According to the tech giant, the new function serves as a way for Arizonans to quickly scan their way through TSA security checkpoints at Sky Harbor International Airport – a feature they are already planning to extend to Colorado, Hawaii, Mississippi, Ohio and more states in the future.

“We’re thrilled to bring the first driver’s license and state ID in Wallet to Arizona today, and provide Arizonans with an easy, secure, and private way to present their ID when traveling, through just a tap of their iPhone or Apple Watch,” Jennifer Bailey, Apple’s vice president of Apple Pay and Apple Wallet, said in a statement.

Arizona residents can add their identification to their Wallet application by entering the application, pressing the “+” button at the top of the screen and selecting “Driver’s license or State ID”. Arizonans need only follow the on-screen instructions and take photos of their face and personal identification card for state verification to complete the process.

Once added to Wallet, Arizonans will be able to tap their phones at TSA airport security checkpoint identification readers, read what information TSA officials are asking for on their device’s screen and then use Face ID or Touch ID to provide the information without unlocking their phone or presenting other forms of identification.

All information sent through the Wallet application is protected under Apple’s data encryption processes, and users won’t be able to access the data unless they pass the biometric measures presented in the Face ID and Touch ID systems, according to Apple.

“Arizona is at the leading edge of states making mobile IDs available to the public, and we are pleased to work with Apple and give Arizonans the choice, convenience, and security of adding their driver’s license to their Apple Wallet,” Eric Jorgensen, director of the Arizona Department of Transportation Motor Vehicle Division, said in a statement on the feature’s initial announcement in September 2021. “Beyond being innovative and exciting, a digital version of a driver’s license offers increased security and privacy for our residents, making it something everyone should consider.”