Study: Arizona has reduced use of coal generated power by 62% in five years 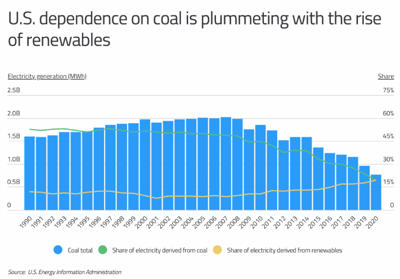 An analysis has found that in 2020, only 12.6% of all electricity generated in Arizona was generated from coal, a decline of more than 62% from five years ago.

Coal is one of the cheapest energy sources available in the U.S., in part because the U.S. houses a large portion of the world’s coal reserves. But coal also has other environmental and social downsides that have made it a less desirable fuel source. Mining and burning coal heavily emits greenhouse gases like carbon dioxide and methane and also poses risks of air and water pollution. Many policymakers and environmental advocates are now pushing for a transition away from coal for that reason.

Until recently, however, cost won out, and inexpensive coal was the predominant fuel source in the U.S., accounting for more than half of electricity generation in the U.S. up until 2003. Since then, dependence on coal has plummeted and currently accounts for only 19.3% of total U.S. generation.

In 2019 the Navajo Generating Station in Page, Arizona, the largest coal-fired plant in the West, was shut down. It has since been leveled.

The swift decline in coal has been made possible as other cleaner energy sources have become less expensive. Natural gas has seen a major boom over the last two decades as techniques like hydraulic fracturing and horizontal drilling made it easier to extract. Renewable sources like wind and solar have also become less expensive and more widely adopted in recent years thanks to government investment and technological advances. As a result, the share of electricity generated from renewables has risen by two-thirds since 1990.

Some states that have traditionally relied on coal both as an economic driver and as an energy source have been slower to make the transition. The majority of coal production in the U.S. is contained to a handful of states, including Wyoming and West Virginia, and because coal is cheap and plentiful, these heavy coal producers are also among the states that generate the greatest share of electricity from coal and a lower share from renewables. In contrast, the states that depend more heavily on renewables either have governments that have prioritized clean energy and emissions reductions or geographic features that make them well-suited to wind, solar, or hydropower installations.

Here is what the analysis found for Arizona:

For reference, here are the statistics for the entire United States: