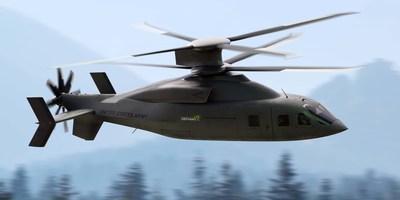 Honeywell has been selected to provide its new HTS7500 turboshaft engine as the power behind the Lockheed Martin Sikorsky-Boeing DEFIANT X® helicopter, currently a contender to win the U.S. Army’s Future Long-Range Assault Aircraft (FLRAA) competition.

The HTS7500 turboshaft engine is the newest and most technologically advanced model in Honeywell’s family of military engines, which includes the iconic T55 engine that has powered the H-47 fleet for over 60 years. Like the T55, the HTS7500 is a highly reliable engine designed to thrive in austere environments and to perform to keep military personnel safer. The HTS7500 enhances mission readiness and exceeds mission power and fuel consumption requirements. The new engine comes equipped with a modernized control system, which enables a highly secure flow of engine data. The control system improves operating capabilities, reduces life-cycle costs, and ensures engine health status through its digital thread road map.

“This engine builds upon the battle-proven architecture of the T55, but the HTS7500 takes engine performance, reliability and efficiency to a whole new level,” said Dave Marinick, president, Engines and Power Systems, Honeywell Aerospace. “The engine is structurally similar, which is great for maintainers in the field because they can use current tools and training. However, when it comes to performance, the HTS7500 is 42% more powerful than the T55-GA-714A and has the lowest total weight compared to other engines in its horsepower class.”

“We’re committed to the U.S. Army’s focus on modernization and multidomain operations, and the selection of Honeywell’s latest engine technology for the DEFIANT X® is proof of that commitment,” said Ricky Freeman, president, Defense and Space, Honeywell Aerospace. “The HTS7500 checks all the right boxes for the Lockheed Martin Sikorsky-Boeing team and the Army, and we are excited to play a part in the future of vertical lift for our Army customer and Team DEFIANT.”

The DEFIANT X® will be the fastest, most maneuverable assault helicopter in history. It can fly two times faster and farther than the Black Hawk and is currently being tested in a digital combat environment, where it continues to prove its unmatched range and survivability.

Get more information on Honeywell’s HTS7500 turboshaft engine and its role in the FLRAA pursuit here.