Carvana to expand headquarters in Tempe as it expects to add 1,000 more employees 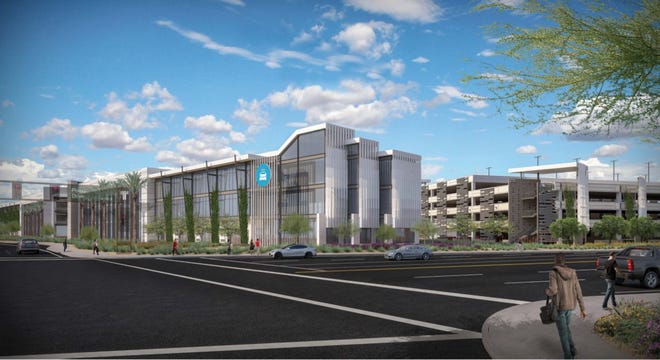 Carvana will build two office buildings and two parking garages on a mostly vacant 15-acre property at the southeast corner of Rio Salado Parkway and Priest Drive where the company occupies an existing office.

The company plans to hire more than 1,000 new employees and needs additional space, the company said in planning documents submitted to the city. A city spokesperson confirmed the new positions will be local. Carvana has offices west of the project site in the Liberty Center business park and leases space in the Marina Heights development on Tempe Town Lake.

“Carvana’s online platform for purchasing, financing and selling used cars has become particularly attractive for customers given the challenges and hardships created by the Covid-19 pandemic,” zoning attorney Wendy Riddell wrote in the submission. “Carvana’s business continues to thrive and grow, and as such, it is seeking to expand its presence in Tempe with this proposal for a unique office development.”

Carvana has carved out a hold on the used-car market through the convenience of online purchases, the guarantee of its seven-day return policy and gimmicks like the vehicle vending machine near Loop 202 on Scottsdale Road.

The company’s stock prices surged 114% in the first eight months of 2020 and it has expanded into new markets despite a sluggish economy brought on by the pandemic.

Carvana didn’t respond to requests for comment about the expansion.

The project consists of 11 lots, including five city-owned parcels that the city purchased with the intent to build a future water treatment facility, according to city documents. Previous efforts to develop the property never materialized and the land has sat vacant.

Carvana will purchase the city parcels, worth just under $2.2 million, to build out its campus. The property will be conveyed to Carvana in exchange for the company building public infrastructure improvements on the land.

Improvements include relocating the First Street connection to Rio Salado Parkway further east to the eastern boundary of the site, designing and building a new intersection and installing a traffic light that will provide better pedestrian connectivity in the area. Carvana also will relocate water and sewer lines.

The company will pay the difference in costs to the city if construction costs are less than the purchase price, according to city documents.

Plans for the site include two new three-story office buildings roughly 109,300 square feet and 132,000 square feet, respectively. The glass-sided buildings range in height from 49 to 67 feet and will be oriented along the north end of the property near Rio Salado.

Two parking structures, three and five stories tall, will go up on the east and west end of the parcel.

The buildings will surround an interior courtyard with plans for a fountain, basketball and pickleball courts, and a turf lawn with games, seating and space for outdoor dining and corporate events that will help create a campus-like setting.

Once completed, the project will bring the company’s footprint at the site to 784,665 square feet, with nearly 300,000 square feet of office space. Developers say the project will transform the intersection into a “recognizable corner” and create a western gateway into the Rio Salado corridor, according to planning documents.

Construction is expected to start in January, city documents show.